Explore the beauty of Mozambique from your private villa in an exclusive beach resort.

Mozambique lies in the Southeast Africa and is bordered by Tanzania in the North, South Africa with Swaziland in the South and Southwest and by Zimbabwe, Zambia and Malawi in the West. The capital of Mozambique is Maputo and the official language Portuguese.
For years Mozambique was isolated and suffered under civil wars. During the last years , the country, which is known as one of the most beautiful countries in South Africa, developed its tourism. Mozambique with its 2800 km long coastline and white sandy beaches at the Indian Ocean is a subtropical paradise perfect for a beach stay after a South Africa safari. 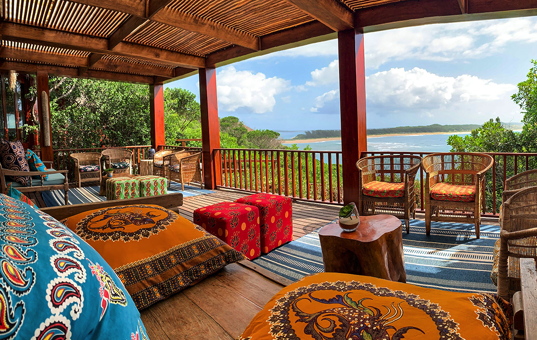 Machangulo Beach Lodge | Exclusive seafront lodge ideal to combine safari and beach holiday
Featuring 9 beautiful Ocean View Rooms, Machangulo Beach Lodge, in the South of Mozambique offers blissful barefoot luxury. Untouched African beaches, untamed nature and luxurious service come together to create extraordinary holiday experiences. Machangulo offers extensive, colourful, tropic reefs ... Read more
Please call +49-89-833 084
Back to top
Especially popular is the peninsula Machangulo in the very south of Mozambique, which is reachable by boat in short time from Maputo.
Machangulo is a nature paradise with amazing more than 20 km long pristine beaches with fine white sand at the Indian Ocean. Machangulo is part of a protected Marine National Park which offers on its thousands of hectare unbelievable nature and protection for endangered turtles. In the hinterlands of the peninsula are 12 lakes and a huge, wild and native scrubland located.
Machangulo offers extensive, colourful, tropic reefs for diving and snorkelling and is a species-rich area for sea angling and bird watching. A safari in Kruger National Park can perfectly be combined with a beach stay at Machangulo. Guests can take the plane to Maputo and will be picket up for the boat transfer to Machangulo. Alternatively guests can take a flight to Machangulo, flight time is about 20 minutes.
For adventurous guests, a private road transfer to Maputo, which takes about 4 to 6 hours, can be arranged.